I’ve been dying to visit Yosemite ever since moving to California. When I discover Camp Curry, now Half Dome Village, I knew we had to stay a few nights there. So, on a January afternoon  I called the park and tried to book a tent for Memorial Day Weekend. All booked up! And the lady informed me that there were only a handful of tents left for Labor Day, so I snapped one up quickly. Lesson: securing camping spots and tents in the whole state of California is a competitive sport. Book your stay at Half Dome Village / any other part of Yosemite months and months in advance. Alrighty, now that’s over, here’s how we spent our weekend in Yosemite!

We left San Francisco at 6am to try and beat the holiday traffic. Around 9:00AM we rolled into Groveland, a cute mountain town about 30 miles outside of Yosemite. I’ve been told from many people that the park can be crazy to get into. So crazy that it can take up to 2 hours just to get through the front gates, so we made sure to take one last pitstop at Mountain Sage Cafe before heading into the danger zone. This little shop is the cutest thing ever. Think coffee shop meets bakery meets garden center meets art gallery. Very charming and earthy, plus the coffee and quiche we had were amazing! Afterward, we filled up on gas and were on the road again. By 10am we were nearing the park and hit the dreaded traffic. But, we were really lucky and only had to crawl along for about 20 minutes before hitting the gate. Lesson: get there at or before 10am to avoid the really long lines. It cost $30 per car to enter and make sure to hold onto the ticket because they’ll check it on your way out. Passes are good for 7 days.

The drive here on out was stunning. We made a stop at the famous Tunnel View lookout point which has sweeping views of the valley and a glimpse of Half Dome peeking out in the distance. It faces East, so everything was very hazy. I would have loved to be in at this lookout point in the evening when the valley is punched with color for a better photo and view. To drive onwards  to the village, keep following the signs. At some point the roads will turn into one ways with two lanes. Make sure to stick to the right side lane – the left lane is for the valley shuttles and you will be ticketed if you are caught driving in it. We pulled into the parking lot for Half Dome Village around 11:30am and found it so hard to get a parking spot. This was mostly due to the holiday weekend, but it’s always hard to secure a spot because the lot is right next to the shuttle where day visitors will drive in and leave their car there. We finally gave up and headed to the front desk for hike recommendations. When there, the lady  told us she had one tent that was already cleaned, so we were able to check in early! Usually you have to wait until 4pm to check-in, so it’s always worth stopping by the desk after 11am to see if they have a tent open sooner. So, we unpacked, settled in and finally a spot opened up in the lot. And you best believe we didn’t move our car for the next 3 days.

By the time we had settled in, it was nearing 2pm, so we opted for a less extreme hike. We grabbed the shuttle to stop #6 for Yosemite Falls. The Upper Yosemite Falls trail is very intense and steep. It takes about 6 hours roundtrip, so we opted to do the Lower Falls. This part is all paved and would take most people less than 45 minutes to walk the loop. Yosemite’s water mostly relies on the snowcaps melting each year, so by late summer,  falls are dried up. This allowed us to climb all over the rocks that lead up to the falls and thus extending our hike. It was fun jumping over the rocks and the view on top was stunning, offering a glimpse of Half Dome.  There is a small pool at that is still there from the base of the waterfall and brave kids were playing in it. The water must be freezing! We brought along a GoPro from Verizon to snap cool pics with while hiking  — made me feel way more secure as I was climbing up all those rocks.

We got back to camp around 4pm, had some snacks and  headed out to Mirror Lake. The walk in is quick. There is a paved road but also a side trail that is much more fun to take. We ran into a deer on the trail, got about 3 feet close to the guy. He just wanted to eat dinner and we were in his way. Mirror Lake is interesting because it’s regressing into a marsh. In the spring, when the snowcaps melt, it’s an actual lake. In the fall, it’s dried up and you can walk in the base, which is what we did. I’d love to come back when there is water for an even more stunning view of the hills reflected in the lake. Around 6pm we headed back to Half Dome Village. We ended up at the pizza deck and treated ourselves to a Medium pizza. We got extra toppings and found that for two people, a Medium was just fine. We also grabbed some beers ($6.25, so not too overpriced) because they have wonderful local breweries on tap. We sat and people watched on the deck for a bit before retiring to our tent.

We allowed ourselves to sleep in to 8am on Sunday and slowly got going. The grocery store has frozen breakfast burritos and a microwave, so for $5 we had a hot breakfast. We brought along instant coffee and quickly made some brew with the free hot water from the coffee maker also in the grocery store. By 10:30, we had our backpack full of snacks and water and were waiting for the shuttle to take up to #17, the stop for Happy Isles/ the trailhead for Vernal Falls.

Guys, I am woefully out of shape and had to take many breaks up the falls. Roundtrip is about 2.4 miles, so you aren’t going far, but it’s all uphill. When you sit at a desk all day, it’s hard! But the views are so worth it. Halfway on the hike you’ll cross a bridge with great views of the falls. There is also a water fountain here to refill any water bottles. The last part of the hike goes quickly and soon you’ll find yourself up close and personal with Vernal Falls. We opted to sit on up high on one of the rocks and rest. The squirrels here are very friendly because they’re always on the hunt for food, and we were visited by this funniest squirrel. Thankfully I brought along my Verizon GoPro so I was able to catch a fun video to share! 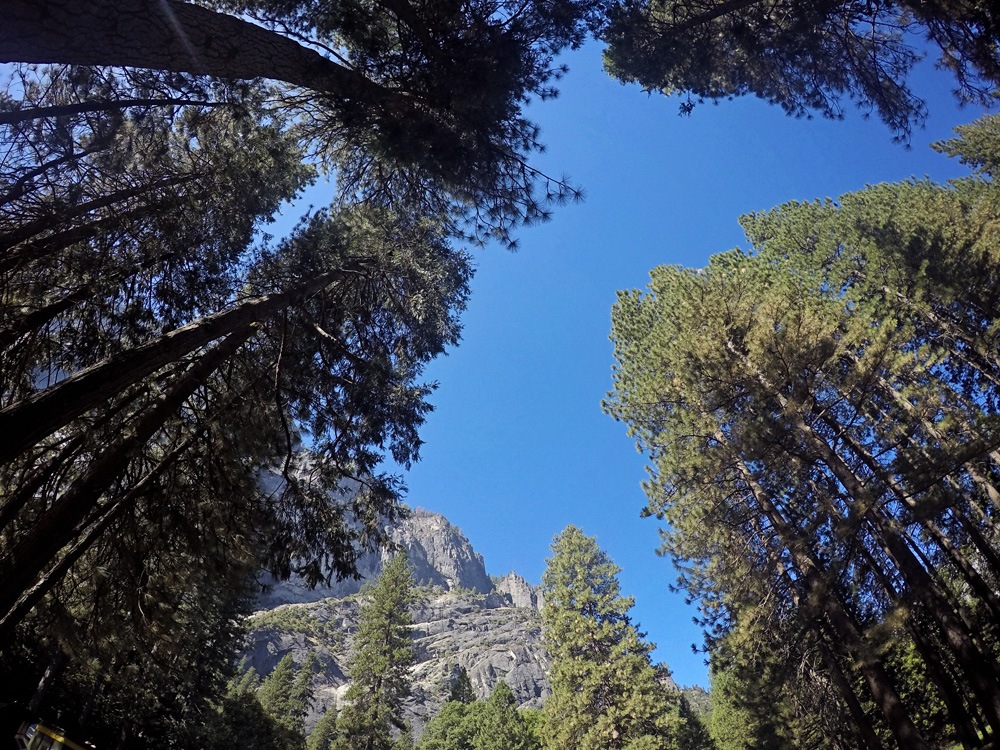 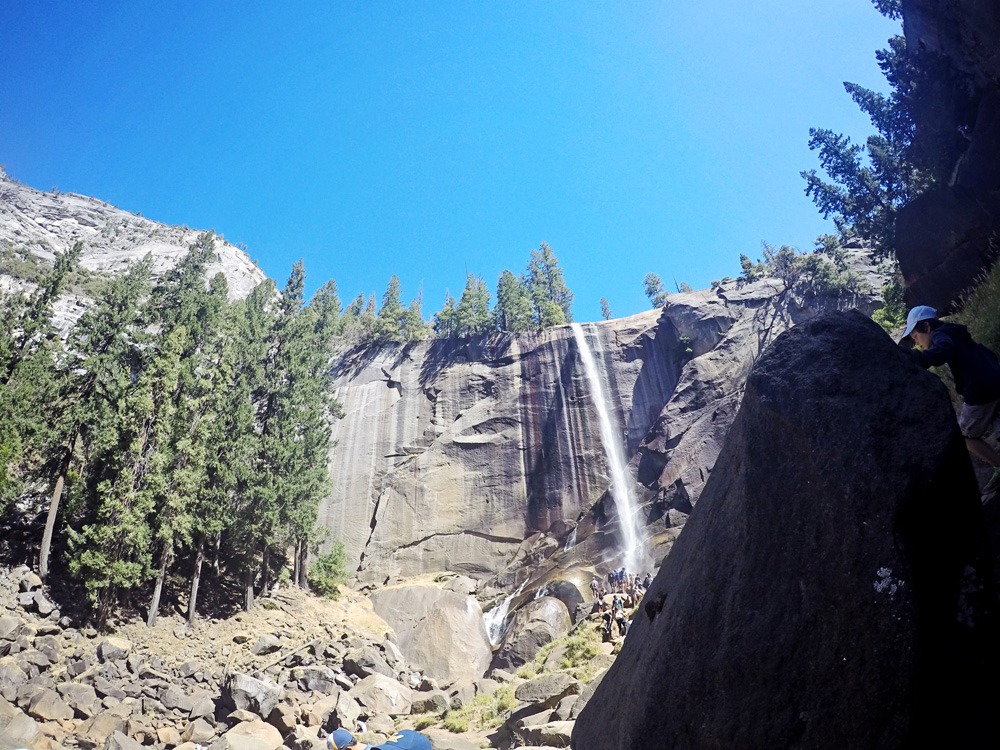 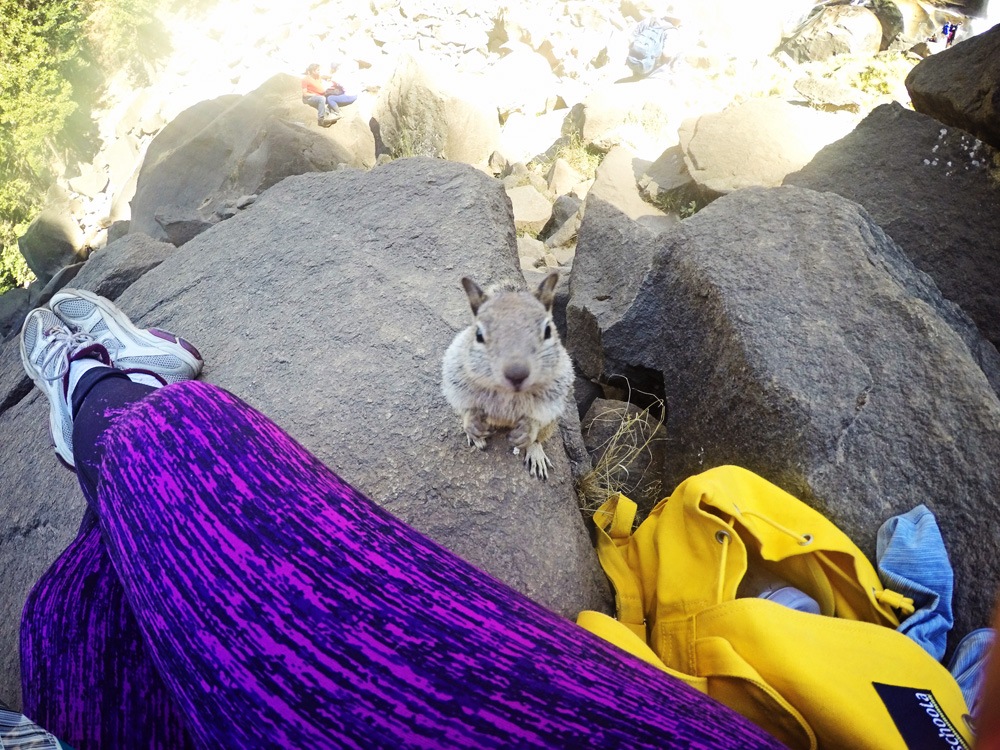 The walk down from the falls is quick (about 20 minutes) but is hard on the knees. Because the buses are overcrowded on the holiday weekends, we opted to walk back to Half Dome Village, about 15 minutes. We had a much needed nap and in the late afternoon ventured around the valley on an easy walk. I was eying the porch all day, so at around 4:30pm, we stopped at the store to buy a deck of cards and claimed a nice spot with the rocking chairs. We had a view of Half Dome in the sunset and excellent people watching. And, because we’re young and in love with pizza, we had another one. This time, Canadian bacon and pineapple. You can drink your own alcohol on the porch, so Robin ran to the store and grabbed a 6-pack to share. We played cards well into the night and about an hour after sunset we headed back to our tent to drop things off before getting some quality star gazing in. We hardly ever get to see stars in San Francisco due to the fog and light pollution, so it was breathing to be able to see the Milky Way in full force. To grab a good view, we headed across the street from Half Dome Village to the meadow and played out on the boardwalk. Make sure to bring some blankets and wear sweater. It get chilly! On our last day, we got up early and did the whole burrito for breakfast thing again. Though this time, we were one of the first people in the store at 8am when it opens, so we didn’t have to wait in line for the microwave very long. After food, we packed up our tent, loaded up the car and checked out. We drove almost out of the park to Tuolumne Groove for one last morning hike before leaving for the weekend.

I wanted to stop by the groove to see some legit Redwoods up close and personal. Plus, this groove is home to one of the famous Redwoods with a hole in them to drive cars through. We had no idea what to expect in this hike. Is it long? Short? Uphill the whole way? Turns out, it’s about a mile from the parking lot to the grove. And it’s all downhill, so it was rough getting back up but the incline wasn’t as steep as the hike to Vernal Falls. There were plenty of children and elderly people visiting the Groove, so you just have to be prepared for a longer hike back up than down. I loved how peaceful it was down in the Groove. Since we were visiting around 10am, there  was still minimal amount of people about and it felt very magical. I made Robin huge a tree with me. Then, about at 11:30am, we drove out of the park and headed back home to San Francisco. Next time we visit in the warm months, I want to spend time exploring outside of the valley and all the way to Tuolumne Meadow. Only 95% of visitors ever get outside of the valley and Half Dome area, so the rest of the park is known for being peaceful and untouched. I also want to stay at Half Dome Village again, but in the winter. I think it would be so magical and cozy!

I hope this helps you plan your visit to Yosemite. If we stayed longer, we may have worked our way up to a longer hike like the Panoramic Trail, but we felt really happy about what we saw and did for our first visit. If you have any questions or things to do, leave a comment below!

A Weekend in Half Dome Village

What to Pack for Half Dome Village